It is estimated that between 2.78 and 3.79 million BTC have been lost. This can happen when people forget the password they have set to protect their Bitcoin wallets. Indeed, many of these lost Bitcoins are stuck in wallets created by Multibit Classic – a software that was launched in 2011 and that was abandoned in 2017. Multibit Classic was very popular back then and many people used it to store Bitcoins that they had bought at ridiculously low prices (at least by today’s standards).

However, some of these people are tragically locked out of their wealth as they have lost their password. When they try to access their Multibit Classic wallet, they get errors such as:

If you are reading this blog post, you probably have tried as many passwords as you could remember, but failed so far. Thankfully, it is possible to automate the process so that you can make more guesses than you ever could by hand. We call this brute forcing. More details below.

There's no sure-fire way to recover your password! The shorter it is, the higher your chances of succeeding are. If your password is longer, you need to have a fair idea of what you might have used to protect your wallet; otherwise, you will be wasting your time.

Locate the .wallet or .key file to brute force

First of all, we have to locate the Multibit file that we are going to brute force. To do so, open Multibit Classic and select your wallet in the application. In the title bar, you will see the path to the relevant .wallet file. In this example, my wallet is named mybtc. 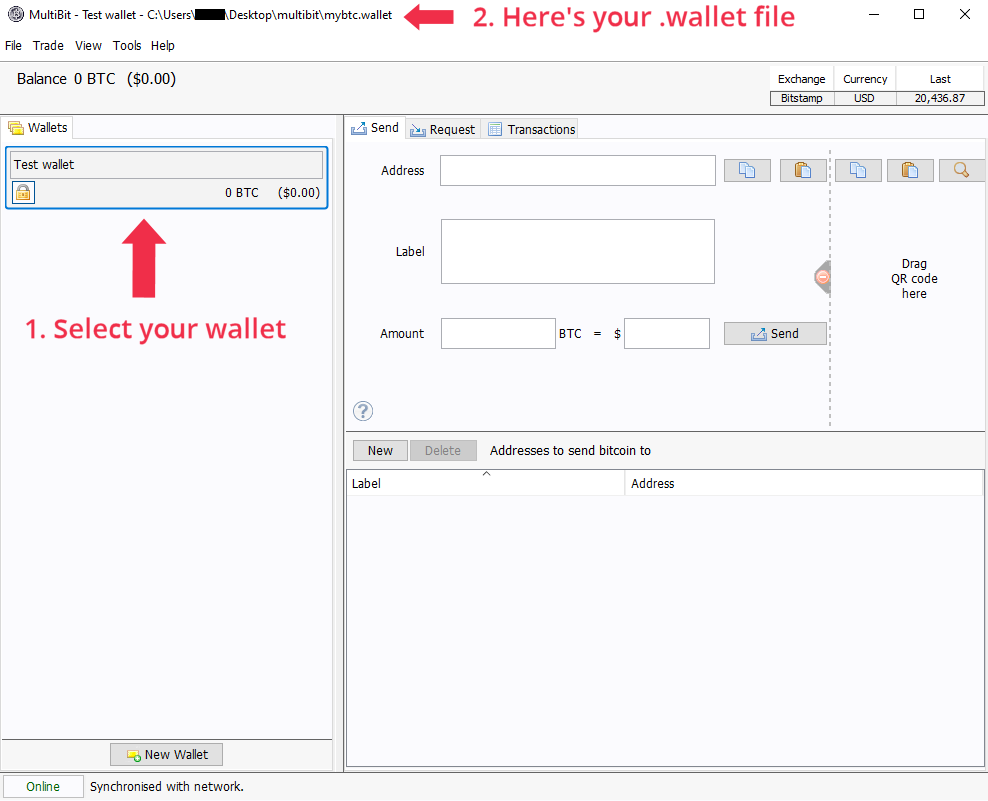 While we could mount our brute force attack against the .wallet file directly, we ideally want to avoid this. The .wallet file is well protected against such attacks and we will be limited to a few thousands of guesses per second – at most. This is surely better than trying passwords by hand, but it’s suboptimal compared to brute forcing the .key file associated to your wallet: depending on the hardware, we can compute millions, if not billions of passwords per second! The only caveat is that you may not have any .key file.

To find your .key file, go to the path where your .wallet file is supposed to be. There, you should see a folder that starts with your wallet’s name and ends with -data. In my example, it is named mybtc-data. Open it. You should now see four folders:

Open the key-backup folder. There should be a file with the following name format: <name of your wallet>-<datetime>.key. In my example, it is named mybtc-20150615120556.key. This is the file that you are going to brute force. If you have multiple .key files, it may be a sign that you protected your wallet with different passwords during its lifetime, though it doesn’t necessarily mean so. It might be worthwhile to try to crack all of them.

If you cannot find any .key file, then you will have to settle for the .wallet file instead.

There are two software that you can use to brute force your wallet: BTCRecover and hashcat. While each one of them has its strengths and weaknesses, they are not so simple that you only have to click on a few buttons and wait for your password to be cracked. In fact, they require you to be somewhat tech savvy. Moreover, you have to be willing to spend hours reading their documentation and searching the web.

I would recommend that you start with BTCRecover as it was designed specifically to crack Bitcoin wallets and has ample documentation. However, it is the slowest of the two software, especially if you are trying to brute force a .key file. On the other hand, hashcat is a versatile and powerful tool with a steeper learning curve and sparser documentation. Speaking of which, if you do use hashcat, you will need the multibit2john.py script to convert your .wallet or .key file into a format it can understand.

If the above is too complicated, I offer a service where I recover your Multibit password for you. Here’s what you need to know:

Contact me about your Multibit wallet
How to Open multibit.wallet?
How to View Your Public Keys in Electrum